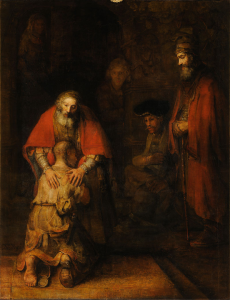 the return of the prodigal son by rembrandt

How astounding it must have been
to those first hearers of the story.
After he wished the years away,
wished his father gone and laid to rest,
his palms itching to grasp the lucre,
his mind reeling with the possibilities –
disposable means, available choices,
everything until now denied to him
in a world where every day was a fait accompli;
after he broke his mother’s heart
(why is she not mentioned in the story?
Was her grief too deep, too sacred for public sharing?)
After he squandered his children’s birthright,
and for what?  Not so much as a mess of pottage;
after he dragged his family’s name
into the literal mire of pig dung;
everyone present knew how the story would end.
And even now, I can see the jaws dropping,
The eyes widening,
The slow, delighted upward curl
of the corners of the mouths
spreading quickly into exultant incredulity.
And me, as I read again Your pièce de résistance
I find myself agape too, at how wide of the mark
my picture of the Father has been,
at how insanely recklessly He loves,
how limitless is His capacity
to bear insult and still forgive.
If this had been the only speech you ever made
It would have told us everything we need to know.

This site uses Akismet to reduce spam. Learn how your comment data is processed.